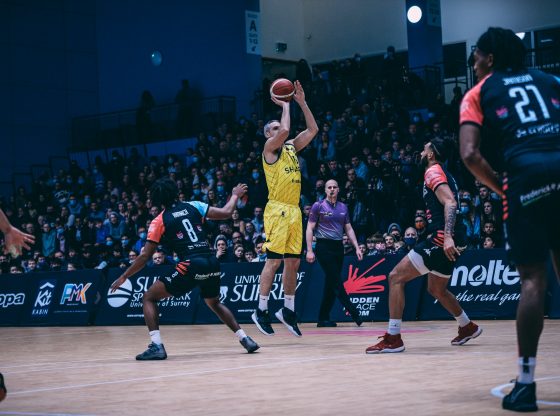 The B. Braun Sheffield Sharks returned to winning ways on a record-breaking afternoon in Surrey. Legendary Captain Mike Tuck became the Sharks all-time leading scorer, picked up his 2500th career rebound and led the team in scoring as a solid team effort saw the Sharks back into a positive 6-5 record in the BBL Championship.

Tuck’s influence became apparent when he entered the game with 4.26 to go of the first quarter. A pair of Kipper Nichols free throws gave the Sharks their first lead at 11-12 soon after, extended by a Jordan Ratinho three from the corner at 12-15. Tuck pulled to within one of Todd Cauthorn’s 4252 tally but it was Joe Mvuezolo, who ended a decent opening stanza for the Sharks with a tough two and a corner trey and a scoreline of 16-22.

A 9-0 Surrey run turned the tables at the start of the second period before the historic interjection of the Sharks influential skipper. A three point shot from the top of the key splashed through the net to send the South Yorkshire men back in front by 25-27 and the Canadian-Brit into the record books with point number 4254. Ten Jordan Ratinho points buoyed the Sharks to the end of the half but a Legend Robertin bucket saw a close half end at 34-38.

Neither side gave an inch during the third quarter. Kipper Nichols picked up his fourth foul inside the opening minute and a half and the Sharks were to battle team penalty from midway in the stanza. However Tuck, playing with new-found freedom, contributed a further nine points as the difference remained at four – 50-54 going into the final ten minutes.

A pair of Devante Wallace treys capped a 2-12 Sharks run as Surrey called for time with the score at 52-64. Historic moment number two occurred when Tuck pulled down his fourth rebound with 6.24 to play to claim 2500 in his prolific career. The game still needed putting to bed however and another Surrey 9-0 run drew them to within three at 61-64 on Stanley Davis Jr’s big triple. It was now Surrey’s turn to hit foul trouble as Wallace and Marcus Delpeche turned it into a three possession game. Despite Davis nailing two of three free throws on the buzzer, it was the Sharks who claimed a much-needed 65-70 success on a truly memorable afternoon.

Devante Wallace heated up in the final quarter on his way to 12 points, 6 rebounds, 3 assists and a steal. Jordan Ratinho picked up where he left off on Friday with a statline busting 15 points, 7 rebounds, 2 assists and 3 steals on 6 of 8 shooting. However, it would have been churlish to have looked elsewhere for the game MVP in view of the stellar afternoon for the Sharks much-loved skipper Mike Tuck. A team top score of 16 points with 5 rebounds and a steal plus two historic landmarks was nothing short of what the forward has been doing throughout his incredible career and was the latest in a long line of honours.

The Sharks take a short break before returning to action on Friday 4th February when Newcastle Eagles are the visitors to Ponds Forge.