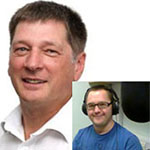 Having served time in the entertainment industry by playing in a band in the pubs and clubs of the 1980s and by working the odd disco since then, Martin Graham joined ElasticFM as a presenter in the summer of 2012 where he still retains his late Sunday evening (9pm – 11pm) slot.

Strongly influenced by the the likes of John Peel, Bob Harris and Annie Nightingale, Martin’s playlist includes a wide variety of genres such as metal, rock, indie, blues, punk, soft rock, soul and reggae. The trademark two hour Sunday Show, “Winding Down the Weekend”, is intended to “lull the audience into a peaceful frame of mind, ready to face another week of work”.

William, who has Down’s Syndrome, joined the show a couple of years ago and he works hard not only behind the scenes by keeping the show on track but also by adding the odd – usually amusing – comment or two.