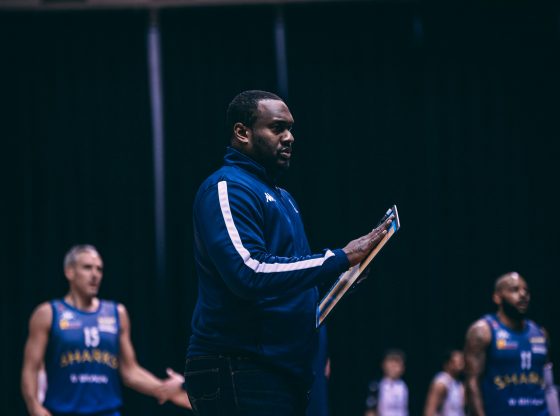 The B. Braun Sheffield Sharks showed plenty of bite on their return home with another milestone-laden win, this time over the Newcastle Eagles. A ninth win in the last ten league games over the Tynesiders returned Atiba Lyons’ men to second in the BBL Championship and also marked an historic 250th career victory in the Championship for the Sharks playcaller.

Honours were even in the first quarter but the step up in energy and intensity from the Sharks was already clear to see. Newcastle opened up a 0-6 lead, immediately clawed back by an 11-0 run from the Sharks, inspired by seven Marcus Delpeche points. Eagles veteran forward Darius Defoe put the North East side back in front at 13-17 as Sharks new signing Antwain Johnson opened his account three minutes into his debut. Despite his intervention, Newcastle talisman Rahmon Fletcher concluded a tied opening period at 19-19.

A 26-17 second period saw the Sharks put their foot on the accelerator. Johnson and Devante Wallace saw the Sharks into a 31-24 lead with back to back threes before former league MVP Fletcher narrowed the gap to five. A Devante Wallace block on Fletcher transitioned into Rodney Glasgow assisting for Joe Mvuezolo on the alleyoop as Newcastle called for time at 41-33. Fletcher’s triple on the buzzer ended the half although the Sharks remained in charge with the score at 45-36.

The anticipated Eagles fightback materialised after the break; Fletcher reducing the deficit to three at 56-53. Antwain Johnson’s trey in transition proved to be the ideal riposte and the former Bristol man’s next attempt also hit the mark as the Sharks once again outscored Newcastle with the score at 68-57 heading into the final stanza.

An ebullient Sharks poured in 34 points in the final quarter; the most they have achieved in any quarter this season so far. Wheels were set in motion by Wallace’s successful three free throws inside the opening minute and underlined by Marcus Delpeche’s rim-wrecking dunk at 80-64 and Antwain Johnson’s one handed effort on the fast break at 90-66. Nate Montgomery sent the Sharks through the hundred barrier with a triple from the top of the key and Oscar Baldwin’s late bucket capped a sizeable and scintillating 102-81 victory.

A thoroughly professional job from the Sharks came with the background of several landmarks. Season highs in points (102), efficiency (139), blocks (7) and two point shots made (34) were achieved by several key performances. Antwain Johnson marked a fine debut with 18 points, 3 rebounds and 3 assists on seven of ten shooting. Devante Wallace contributed the highest efficiency of any Shark this season (32) for a very composed 20 points, 7 rebounds, 7 assists, a steal and 2 blocked shots. It was Marcus Delpeche who benefitted from the stellar work of his side’s backcourt on his way to MVP honours. Solid finishing saw him to 23 points, including five of five from the free throw line, to boost his team back to second in the BBL standings.